GESANG - The Man and His Music 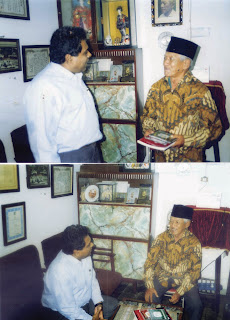 GESANG and His Music

In 1995 while I was in Solo for an ASEAN Composer’s Forum, I met Gesang through the good fellowship of my dear friend DR. Rahayu Suppaangah, another legend from the same little town of Solo. I wanted to meet Gesang because I saw in him some of the same qualities and aspirations as our own Zubir Said, who came from Padang, many miles to the north in Sumatra. I had many conversations with Zubir Said in the 1980’s while I was on a Cultural Foundation project to document some of his music.

The world was not talking much about Gesang then, although his famous song “Bengawan Solo” had encircled the world, and received so many interpretations, that the original style langgam in which it was written, had all but been forgotten. There were burning questions in me as a musicologist, and great curiosity as a composer, to ask him, similar questions I had asked Zubir Said, who both came to fascinate so many of us, placing an indelible imprint on the East-West confluence of music in the mid-20th Century.

I thought I would meet an old man, in retirement mode, who was bemused by yet another academic trying to understand something that was best left alone. Instead, I met a robust man in his mid-70s, soft-spoken, casual and extremely polite, like a true Soloanese, and who had an active performing and teaching schedule, which I thought was much more than my fulltime one.

With a sparkle in his eye he also told me that he had just re-married – as if it was the most casual thing on earth – and proceeded to ask questions about me, which I knew was to place me in a list of others, who had come on similar missions. His humble home was as traditional as it could get in Solo, a blend of nature and humanity literally, and all the walls spoke of what others spoke of him – photographs, citations, and unique souvenirs, given to him in appreciation, from many parts of the world. The link with Japan was particularly strong.

Jokingly, he told me that his surroundings were good for his music compositions. What he could not understand was the world’s obsession with just that one song he wrote – Bengawan Solo. I was suddenly reminded of Freddie Aguilar in the Philippines, whom I also know, and who thrived on just one song “Anak”, after which his creative life seemed to have thinned off. Yet, there was a marked difference in the wealth between these two.

After much prodding, Gesang reluctantly revealed that it was difficult to get royalties from Bengawn Solo, and many of his other equally famous compositions like “Sapu Tangan” and Jambatan Merah”. He was aware that there was no infrastructure to ensure this. What sadden him more, was that many others were claiming to have composed these songs. Like Zubir Said, he just wanted to be a peaceful and happy musician, and not be bothered by these worldly things. They were complicated, and sounded dangerous, especially when legal jargon was thrown around.

Lately, the Indonesian government did set up a body to deal with these copyright and royalty issues. He obtained some compensation, but it was a pittance. It is the rest of the world that needs to make up for the injustice done to Gesang, and all others like him!

It was a joy talking to him. I learnt that the original “Bengawan Solo” was in the langgam jawa style of Central Java. It was not mundane popular music, as I and many others thought it was. Langgam has no time measure. It is based on pantun (poetic quartrains), and the musical accompaniment is colotomic, as in gemelan music. Langgam Bengawan Solo is the gentle flow of the Solo River, and the deep thoughts of love and gratitude that the people of Solo have for their life-sustaining river.

Gesang always paused in our conversation to remind me that he was not an academic, and that he did not study music formally. This was exactly what Zubir Said also did in our conversations. Both men made me reflect, not on their “inadequacies” but on mine, as well as, the entire discipline of ethnomusicology. From him I gleened an understanding of the other kroncong forms (stanbul, morescu, togu and other derivatives).

And, he still claimed he was not a musicologist! One understands in conversation with men like Gesang and Zubir Said, how they are aware of musical topography, geography, and history, in a deeply imbibed manner, that makes them able to produce works that define new musical forms that endure, and yet they are humble and defensive.

Gesang is a national hero. He was buried with full military honors on Friday 22 May. On Monday 24th May, the ASEAN Korea Traditional Orchestra (AKTO) performed, for the delegates at the 2nd UNESCO World Conference of Arts Education at Seoul, and in it’s repertoire was Bengawan Solo, sung by one of Solo’s establised langgam jawa singers, Surti Respati. This arrangement by Soloanese composer, Franciscus Purwa Askanta, is a difficult and challenging one to the orchestra and conductor as the art of langgam has to be imbibed. My good friend, Dr. Supanggah was there in Seoul to supervise the performance of this work.

The legacy of Gesang is alive just like that of Zubir Said, and will pose a challenge to those of us trying to work through the East-West confluence in music.

To watch a performance of Bengawan Solo by AKTO: http://www.youtube.com/watch?v=oxRf7SIyqoY&feature=related