Music of the Great Depression 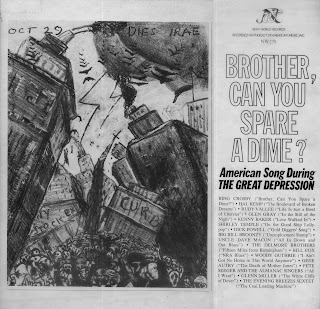 I have a huge vinyl record collection, and a few days ago, I came across this very rare album in my collection - American Songs during the Great Depression. By any standards, this was a mammoth production by New World Records, made possible through a grant from the Rockefeller Foundation. The production drew from many sources - CBS, RCA, MCA, Twentieth Century Fox, Folkways, Library of Congress and even Robert Altshuler, a private collector. It is an album that has pathos and humor all rolled into an absorbing commentary, not just about the depression, but also about the important juncture song-writing in USA reached during the Depression years.

Song-writing in America, as we know it, grew out of it's stratified social settings in pre-twentieth century communities. By the early twentieth, century song-writing fed into the business machines of New York, Chicago and many other major cities. Music performance and recordings were money spinners, typified best by Tin Pan Alley, the musicals of Broadway and the large movie studios. In the ten years of the Great Depression, creativity and song production reached it's height, although purchasing power was at its lowest. What a paradox! Just imagine, George Gershwin did much of his best work during this period!

The very first track of this recording, "Brother. Can you spare me a dime?" (1932), is the defining song, not just for the production, but the Depression itself - speaking directly and plainly, in Tin Pan Ally ragtime style, about the effect of the cash-drought at ground zero. Written by Jay Gorney ("Stand Up" and "Cheer" musicals), and with lyrics by E.Y Harburgh ("Wizard of Oz", "Finian's Rainbow", "April in Paris" and more), it became an international hit with Bring Crosby and the Lennie Hayton Orchestra. Other "tongue-in-the-cheek' songs in this album include the anonymous "Unemployment Stomp", the "NRA Blues" by Bill Cox (surprisingly not a protest song, but a song of praise for the agency that sought to create more jobs), and "All In Down and Out Blues" by David Macon - a hilly-billy contribution to the niggling cash problem - "I've got no silver/I've got no gold/ I am almost naked/ and it done turn cold".

In the same vein, is the song "I Ain't Got No Home in This World Anymore" written and performed by Woody Guthrie. In true wandering minstrel style he sings, in a very prophetic way, of the sorry state of ordinary Americans in the Great Dust Bowl: " Rich Man took my home/ and drove me from my door/ And I ain't got no home/ in this world any more". There was no Fanny Mae or Freddy Mac then - to help, needles to say, to bail out!!

Shirley Temple too (she must have been five at that time) has a band (the old term for tracks) called "On the Good Ship Lollypop" by Sidney Clare and Richard Whiting. Apparently, going to any of her movies back then was a great relief from the woes of the day because her songs, and demeanor, invoked innocence and hope - the other side of Wall! Perhaps, she should re-appear on the screens today! On the flip-side of Shirley Temple, is the song "The Death of Mother Jones", anonymously written on the life and contributions of Mary Jones, a historic figure in early American unionism in mid-nineteenth century. And so this song goes: "May the miners all work together/ To carry out her plan/ And bring back better conditions/ For every laboring man". Would Obama be a re-incarnation of her?

One of the most definitive songs in this album is from the movie Moulin Rouge: "The Boulevard of Broken Dreams". written by Al Dubin and Harry Warren, who are acknowledged as one of the best song-writing teams of the thirties (Tiptoe through the Tulips", Lullaby of Broadway", "Jeepers Creepers" and more). The song was first performed by Deane Janis and the Hal Kemp Orchestra. Bye the way, this Moulin Rouge is not the same as what appeared in the 1950's (about Toulouse-Loutrec) and which we know more about today. "Boulevard of Broken Dreams" had a life of it's own, out performing the original movie, and recorded by many illustrious singers and bands including Benny Goodman and Helen Ward.

Another definitive song, by the same team (Dubin and Warren), but this time in an anecdotal way, is the "The Gold Diggers' Song" on Band 8. The story goes that when the song was in rehearsal, the Depression broke out, and the show had to be cancelled - for the same familiar reasons: foreclosures and unemployment. In true "Upturning the Downturn" style, the show organisers re-named it as a show about the Depression. So much for creativity!

George Gershwin's song "Love Walked in", with lyrics, as usual, by his brother Ira, appears on Band 5. Gershwin is really the odd man out as he was not a product of Tin Pan Alley. However, his style, and sense of timing of his compositions (producing most of his great work from 1929 till he died in 1938) just made him one of the most emblematic composers of the Depression. "Porgy and Bess" written in 1935 is, perhaps, a binding definition of being black during the Depression. Surprisingly, none of the songs in this musical appears in this album. Nevertheless, "Love Walked In" is on par with other songs like "Embraceable You" and "Can't Take That Away from Me" - it gave Americans, and others around the world too, a feeling of fantasy and release.

The last song in the album is "The White Cliffs of Dover" - a song that brings back images of World War Two. The Depression ended with America's entry into the war - how ironic! If this could only have been a parallel for USA today, with the recession and the two wars it is fighting. Written by Nat Burton and Walter Kent, and based on the the poem (and subsequent film) of the same name by Akice Duer Miller, the song touched an emphatic chord in Americans - they held in high esteem, England's steadfast stand against the the bombing by Nazi Germany - Churchill versus Hiltler to Obama verses Osama. History does repeat itself.

Posted by Joe Peters at 4:12 PM No comments: