The National Anthem of Singapore 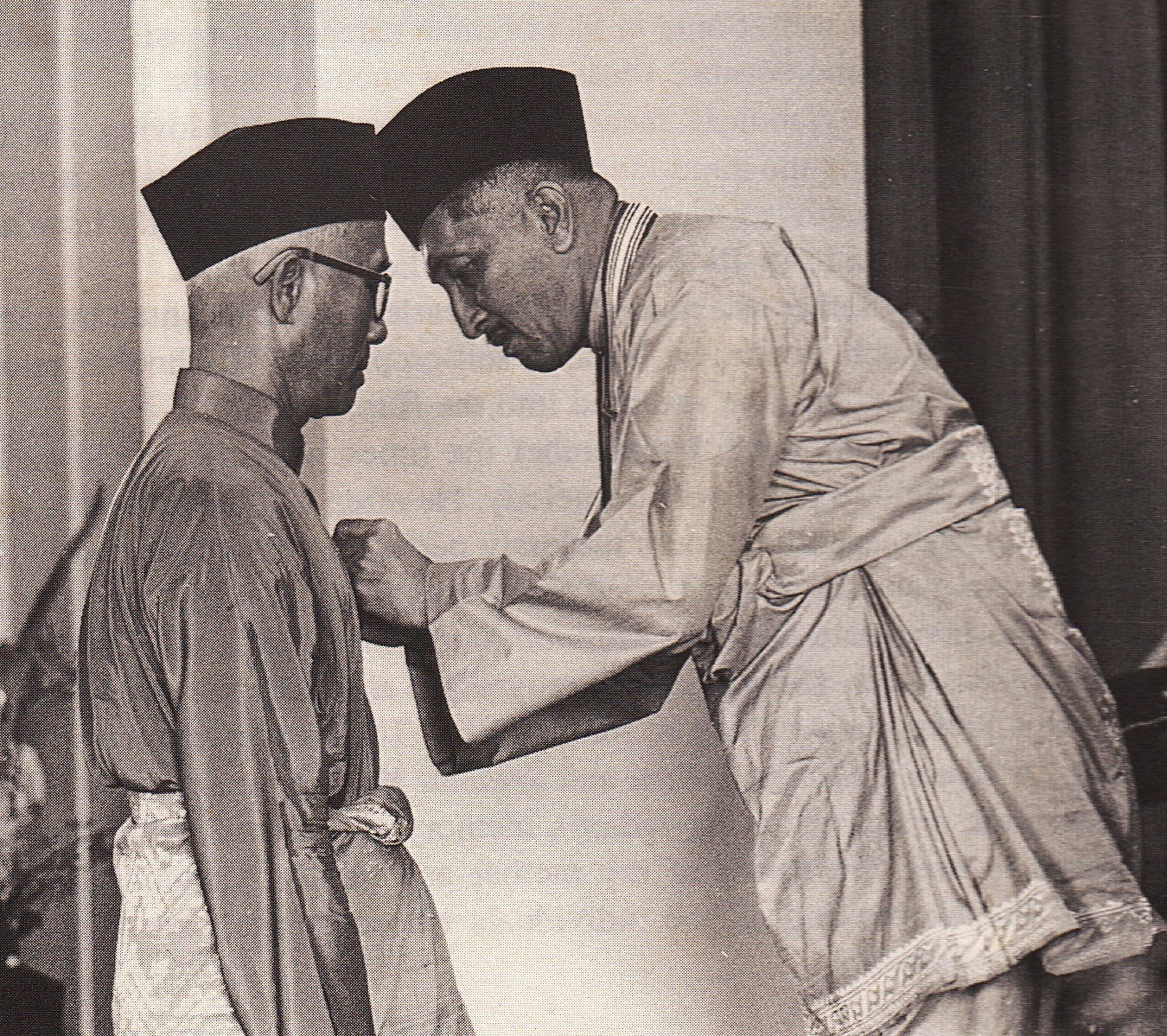 This statement is not just the ethos for a nation's anthem but a formula for musical creativity and inclusivity of musical cultures within any independent nation. A nation coming out ,ore than a century of colonialism and trying to unify itself with a diverse tapestry of cultural, political, historical and social identities.

The story of Singapore's national anthem is one that resulted from collective action but based on one man's creative energy and professional sincerity. When Zubir Said wrote Majulah Singapura he was not a citizen of Singapore. He was rising in the world of film music and was already acknowledged as a song writer. Underlying all this, he had no formal musical training. He was a self-made entity that grew from conviction, resolute purpose to the point of breaking traditional ties with his father in particular, because Zubir heard a call that transcended his Minangkabao homeland in Sumatra. He followed the path of the perineal itinerant musicians who flowed with the developments of the 20th century along the Asian Sea Trade Route. Singapore was an important part of that trade route and it was also a special attraction for such musicians.

The First Version of the Singapore Anthem

Majulah Singapura was first written in 1958 for the re-opening of Victoria Theatre after it went though upgrading. Then when Singapore obtained self-government in 1959 it was refined again and made the country's national anthem. This was how it looked in cipta notation in 1959 - the notation of the solmisasi system in music in most of Asia at that time. 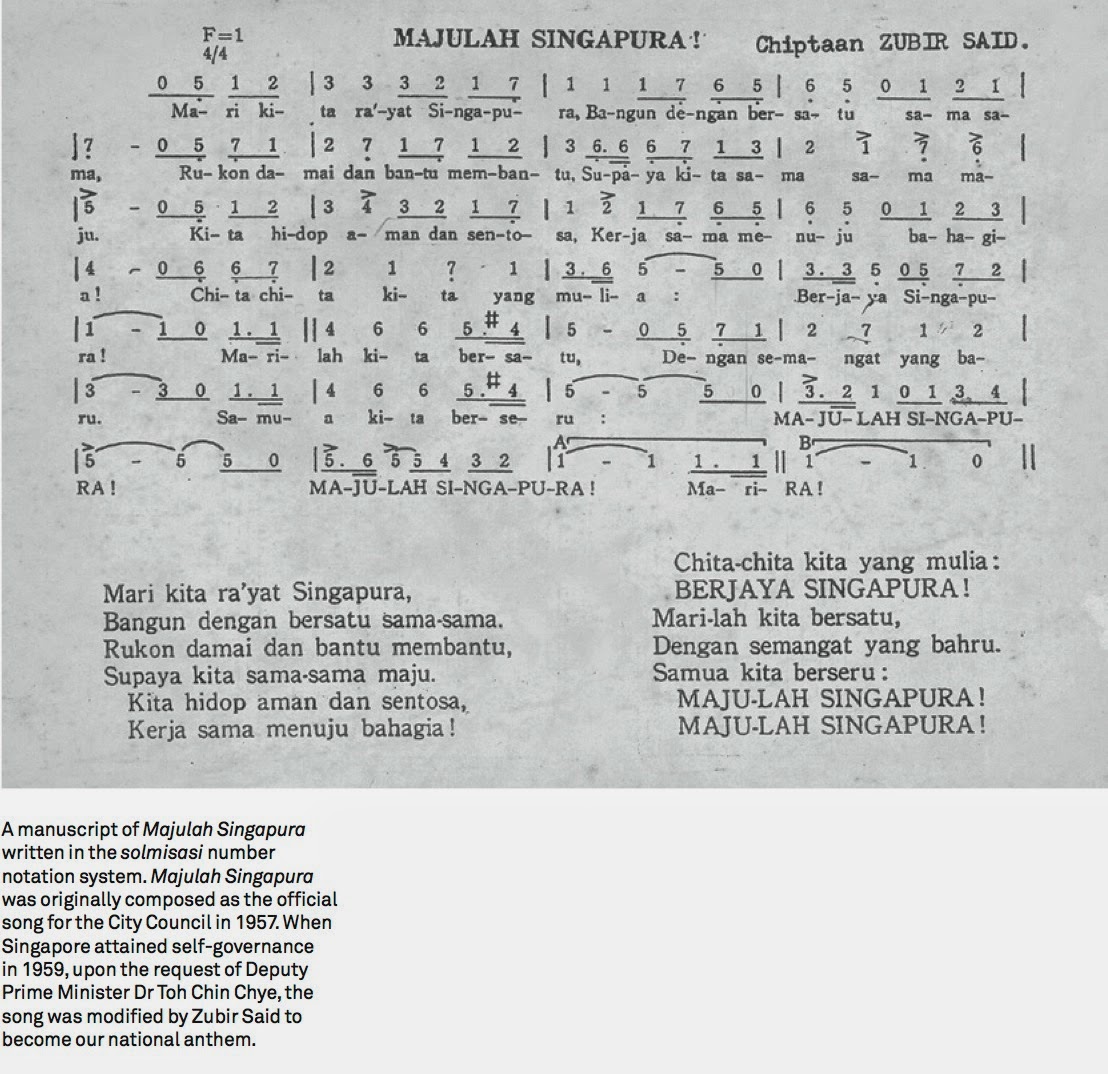 There were floppy single based vinyl recordings of that first version using R.M.P 331/3. These old floppies were usually testing single recordings on the market before they were pressed into vinyl records. I suppose some copies were made for the event in 1959. I happened to know someone who had that but who did not want to part with the recording. But I was allowed to make a copy. 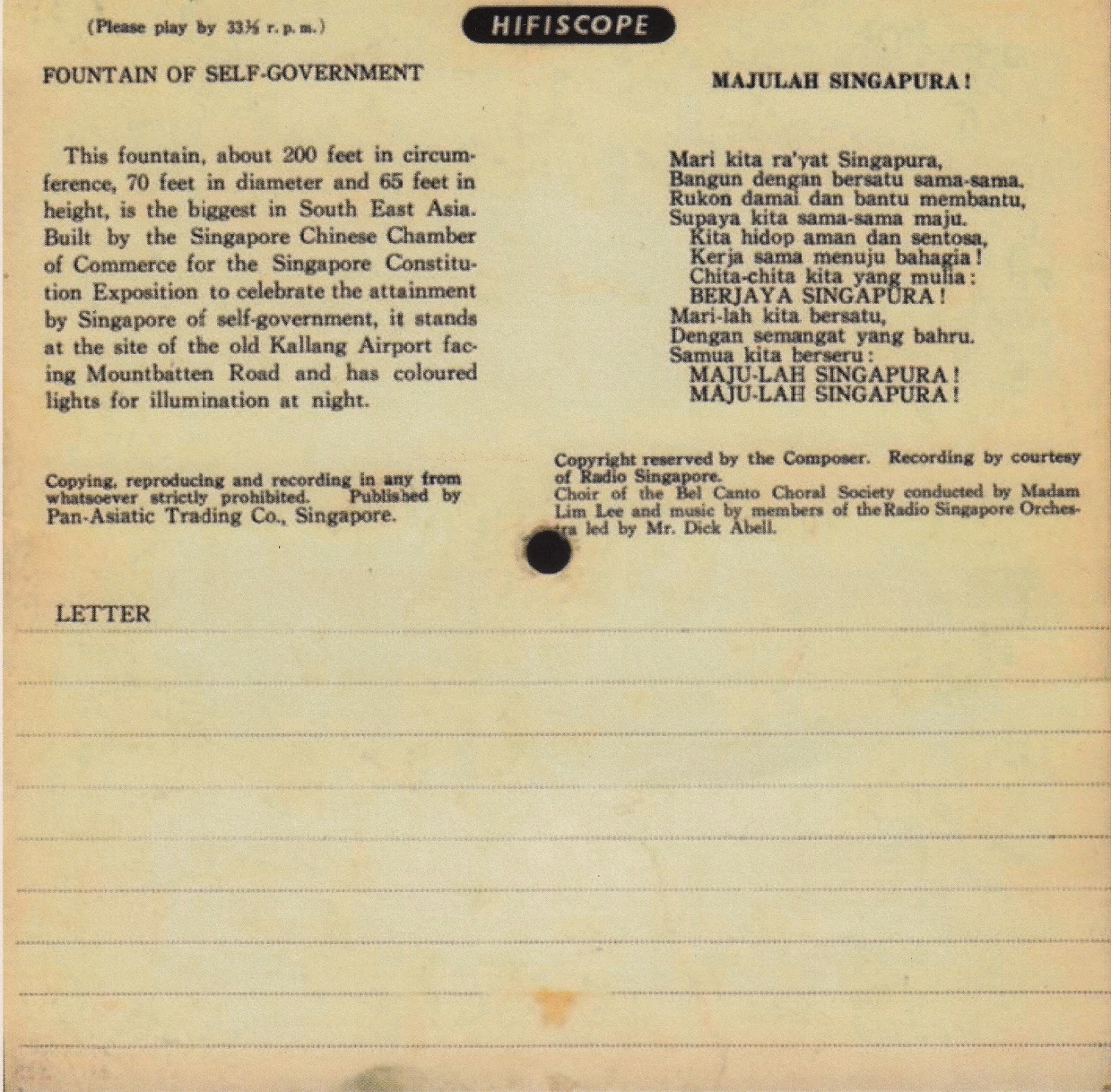 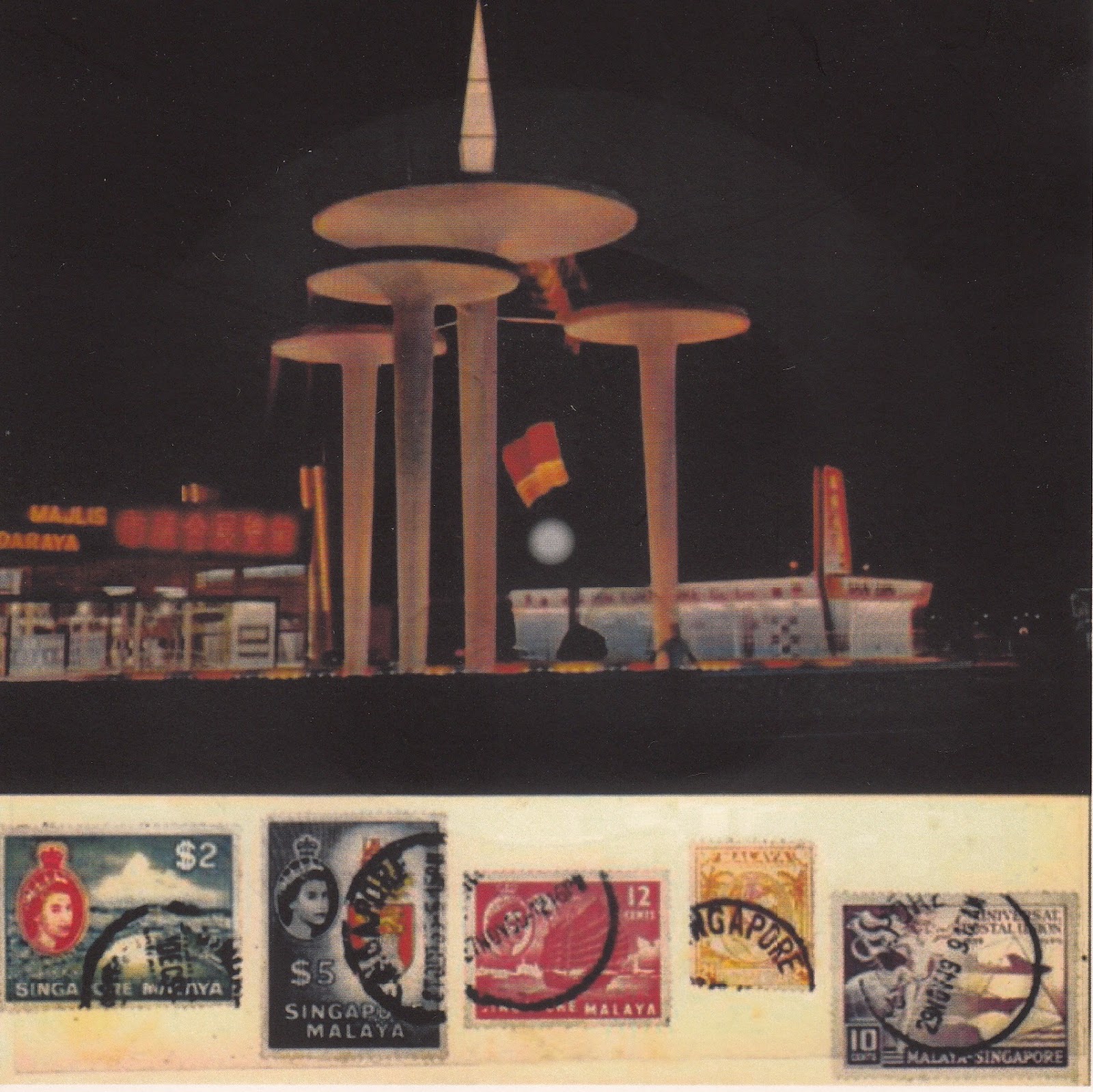 Timeline Music Annotation is a new way of writing text and manipulating graphics to sound. I use this in my teaching and archiving. To know more, see the my earlier blog entry:http://thesonicenvironment.blogspot.sg/2014/06/tmal-timeline-music-annotation-library.html

The Annotated Line Score of the Original Majulah Singapura

When the anthem for Singapore as a Republic was established, Majulah Singapura went though a review which finally ended up in eight bars being removed. Musically that was a good move. Culturally, those eight bars also contained musical motifs that leaned on Malay music fundamentals - I explain this in the short video that follow the score below: 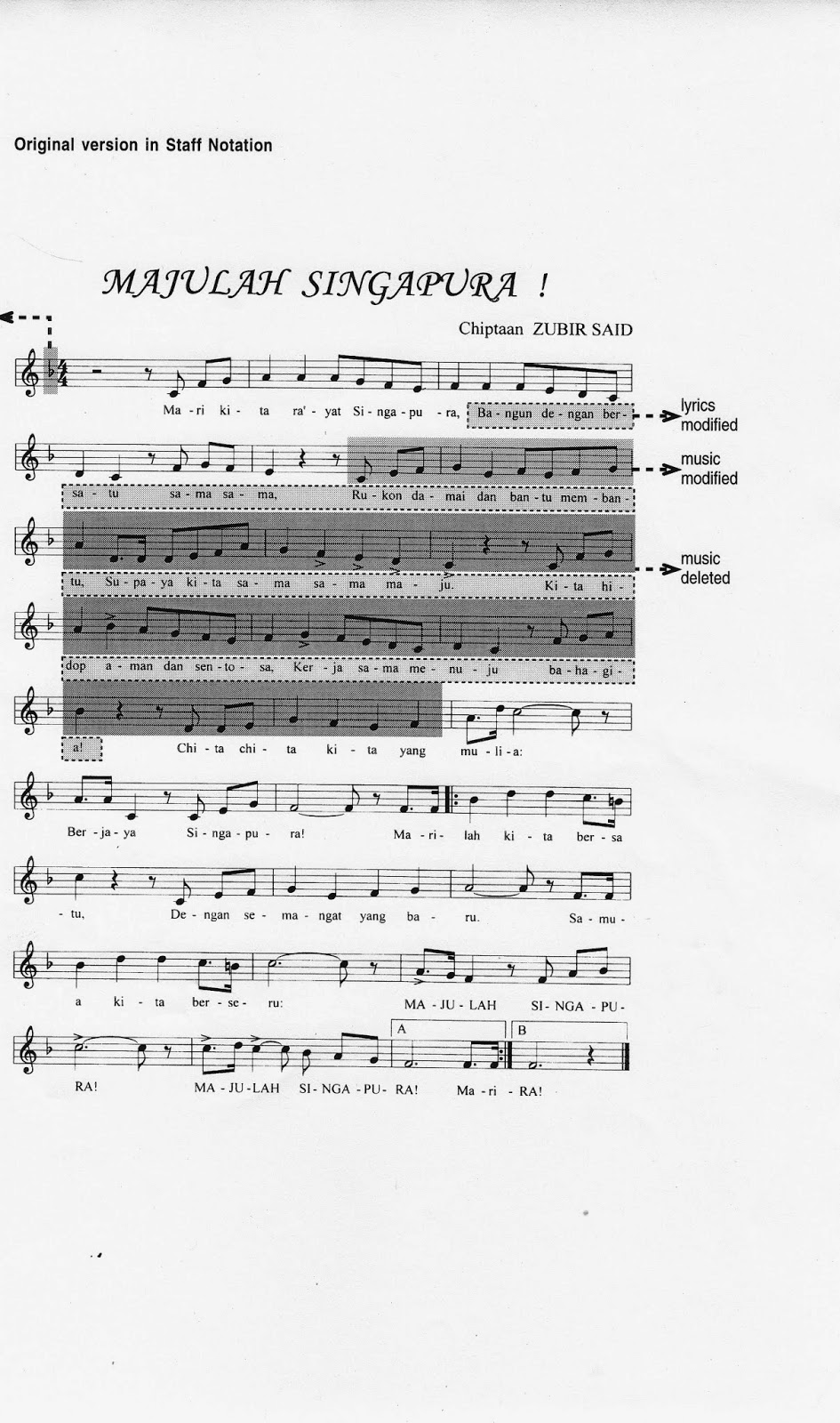 Video Excerpts on the removal of the 8 bars


The Line Score of the National Anthem of Singapore

This line score is a staff notation version of the cipta notation above. It has been annotated to show the 8 bars that were removed. 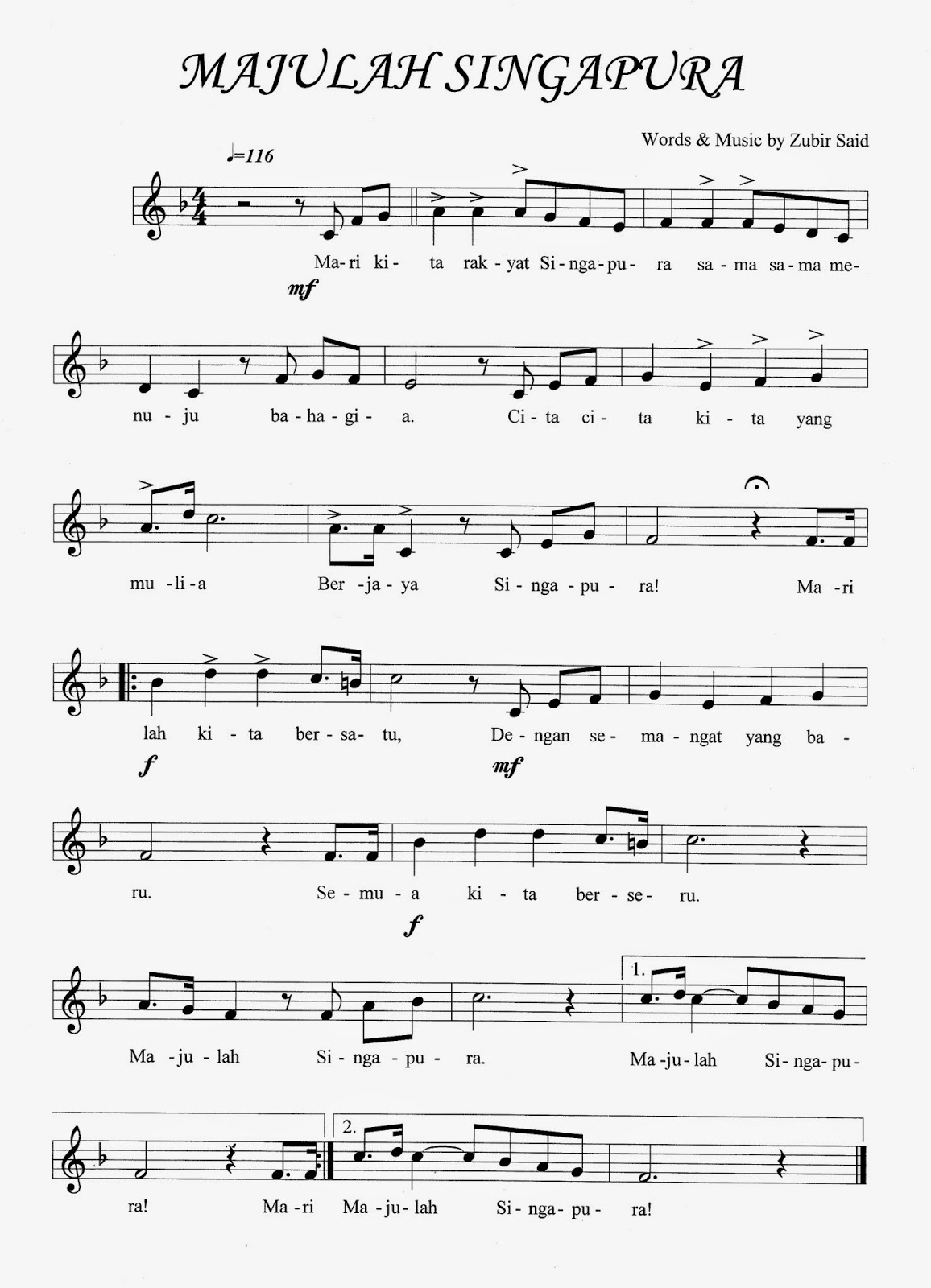 Many Versions of Majulah Singapura

There were many different musical groups that performed this Singapore Nationa Anthem. Here are 10 such versions complied into a Timeline Music Annotation format and made into a video. In this format text and graphics can be used to make notes and explanations directly to the sound timeline of any piece opt music. To learn more, refer to the earlier blog on TMAL at this sonic environment blog. TMAL is a music education project of Sonic Asia Music Consultants in Singapore. Currently, a server based operation is being tested.

If you have made versions of the Singapore Anthem, please share when with me as I would like to make a study of musical aspirations in our anthem. There have been calls for change or re-arrangements of the anthem. I have always stood for no change in the anthem = but we can do with different arrangements. You can contact me at the following sites:
Email: sonicasia@singnet.com.sg
Facebook: https://www.facebook.com/sonicasia
Or at this blog right here.