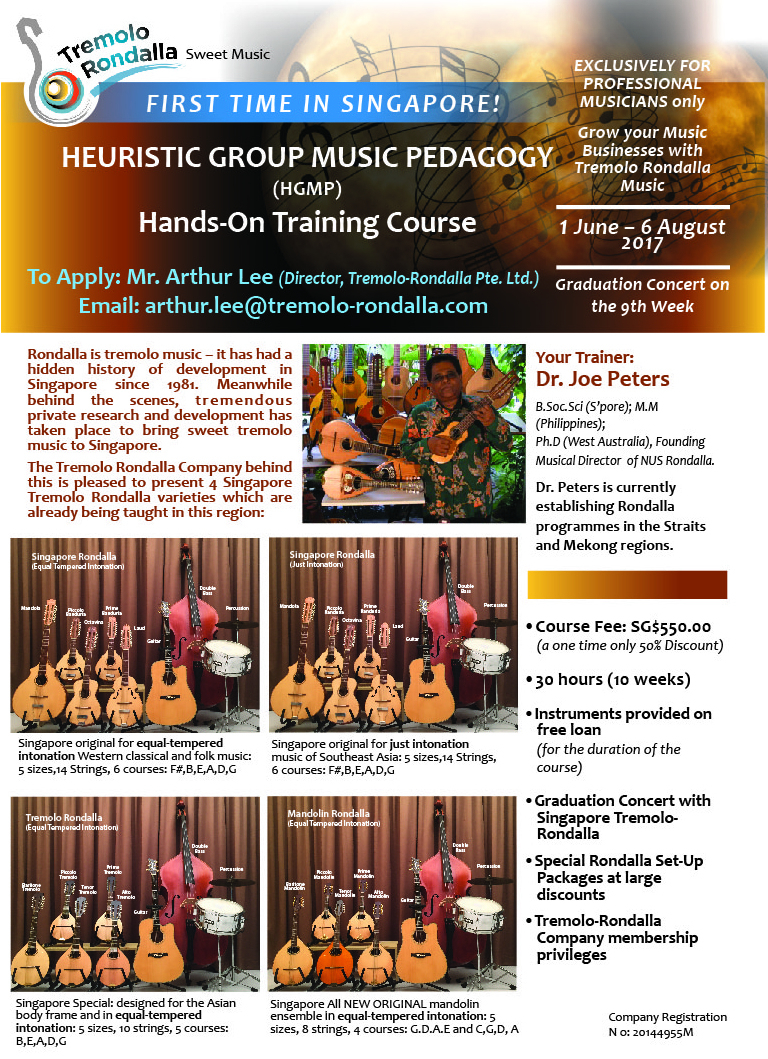 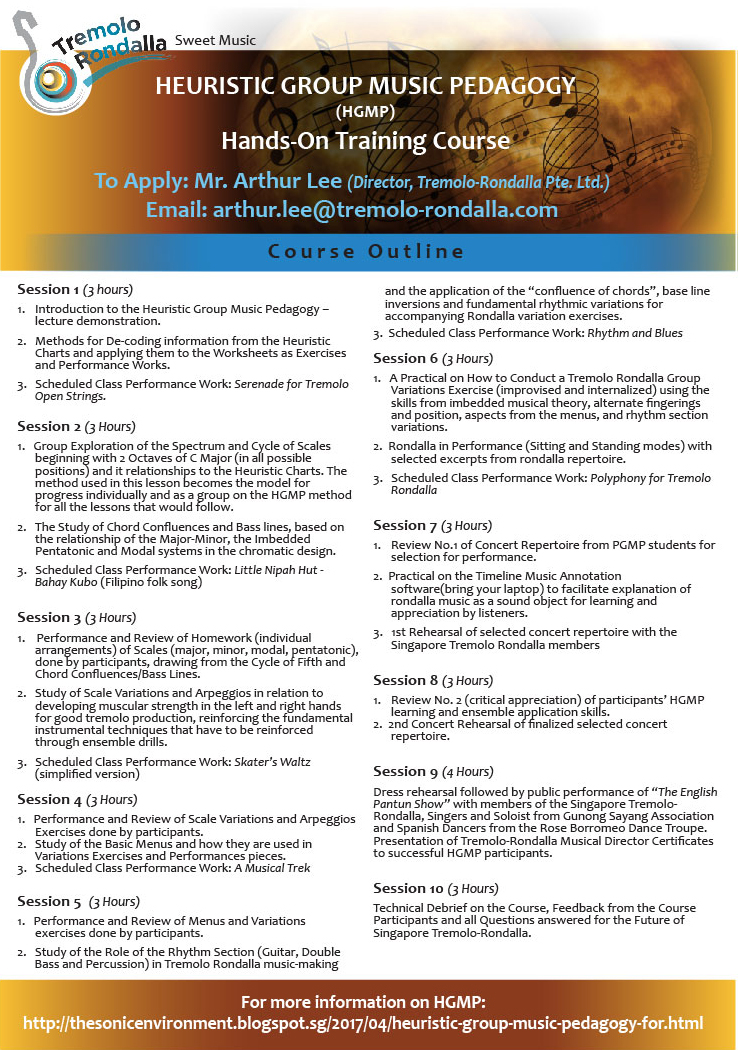 The next big “eye and ear opener” came in the 1970s while Dr. Peters was a graduate student at the University of the Philippines. Here he came across (totally by chance) the unique group pedagogy used by the late Professor Rodolfo De Leon to teach a class of rondalla students. 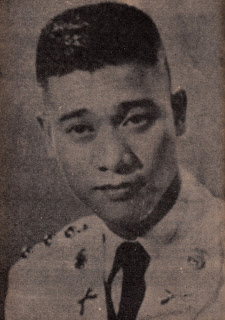 Dr. Joe Peters on his first encounter with Rondalla in 1978 with the late Professor Rodolfo De Leon – his teacher/mentor: “What I heard amazed me, because the tremolo, played on steel strings, was a new musical sound to me. What I saw amazed me even more. There was this professor, in a close army crew cut, wearing a T-Shirt and faded jeans, only slightly older than me, instructing 40 students from the center front, with just a chalk and a black board. He was engaging and superbly knowledgeable. He was the late Professor Rudolfo De Leon. I watched his two hour lesson, as he instructed the students with exercises and music scores, all of which he wrote, off the cuff, on the black board, and the rondalla students just attentively absorbed and played. His pedagogy was just incredible. It was totally heuristic

In 1981 Dr. Peters setup the NUS Rondalla to test if the heuristic pedagogy could be adapted to the extra-curricular formula in Singapore. It was also a promise to Prof De Leon that he would bring back to the Philippines a Singapore Rondalla. This he did in 1984. 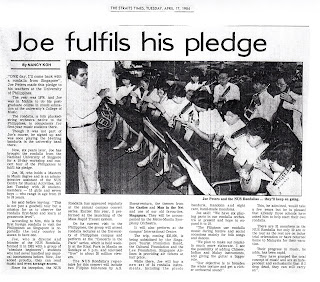 Many have asked Dr. Peters why rondalla did not become a music activity in Singapore Schools! There was a plan to do this in the 1980s, because 12 schools had asked for it. However, he wasn’t sure because the heuristuic method had no literature or method book and the instruments had to be upgraded. Nevertheless, he selected Marymount Convent School to do a test application.

First School in Rondalla in 1985

(In this news video (1984), Dr. Peters refers to rondalla as "plucked strings". He has since changed the term to tremolo).

The experiment with Marymount brought the two issues to the forefront:
1. Most listeners found the music to be “out of tune” and the first re-action was that the instruments were faulty. It was hard to counteract this argument, because the knowledge of intonation in Singapore was limited and wholly based on the experiences of ABRSM and Western classical music. The issue of “out of tune” was related to the “just intonation” cutting of the fret board of the rondalla instruments and it served the Philippines well – their greatest achievement was Bayanihan, devised and established by the late Dr. Lucrecia Kasilag under the Cultural Center of the Philippines.

This same Dr. Kasilag together with the Late Emeritus Professor Frank Callaway from the University of Western Australia, had a decade earlier written a special report for the late Dr. Toh Chin Chye, Deputy Prime Minister and Vice Chancellor of the University of Singapore, that led to the establishment of the first academic music department in Singapore. That report called for a balanced East-West music education, Unfortunately, it was never followed. If that report was followed, then Singapore would have understood the “just intonation” basses of all the music in this part of the world. It is a complex subject and needed time to study. Dr. Peters took that upon himself and his Ph.D read and written at the University of Western Australia was one track of this complex study.

2.  The second issue that was raised by parents of the Marymount Convent was that the instruments, because of the exposed string termination, destroyed the student’s clothes and caused injuries sometimes. This was a more serious issue that related to other issues too of the general design and quality of the Filipino rondalla instruments. Dr. Peters tried his best to get the rondalla practitioners in the Philippines to engage in a number of instrumental design reforms without much success. Finally, he decided to concentrate on two luthiers, one in Vietnam and the other in the Philippines and begin a process of redesign. That effort has produced the four varieties of Singapore styled rondalla that this course is offering. The address cumulatively the issues of tuning in equal and just temperament, re-designing of the string termination as well as the string alignment, creating new models to suit the Asian body frame and expanding the mandolin varieties so other string categories can do easier conversions e.g., violinist who would also want to play mandolins.

In the last decade, HGMP has been re-tested with some of the new rondalla varieties in several different institutions in Singapore and the region (Straits and the Mekong Basin), expanding also into issues of cultural relevance, musical hybridity, and making adjustments to ongoing instrumental design.

The heuristic approach weaves four pedagogy inputs to facilitate tremolo music in environments where there are multi musical intonation systems – something vital to this Southeast Asian region:

1. An understanding of the motor-muscular mechanism through practical and simulation exercises from the first lesson to support and ingrain good instrumental technique;
2. A deep understanding of the sound spectrum of the instruments in the tremolo-rondalla, coupled with fret-board studies to develop clairaudience listening skills and a birds-eye view of finger movements and finger positions from the first lesson;
3. An integrated approach to understanding and applying music theory based on fundamental principles encapsulating musical intonation – a vital part of musicians ship in multi-cultural societies, particularly where the default in music education lies in Euro-American music theory which focuses only on the Western equal tempered intonation system;
4. Developing the habit of writing musical exercises and performance music independently. This habit develops confidence in the musicianship of the individual within a group music activity.