Dr. Ramon Santos: From Vanguard of Filipino Music to the Conscience of Asian Music 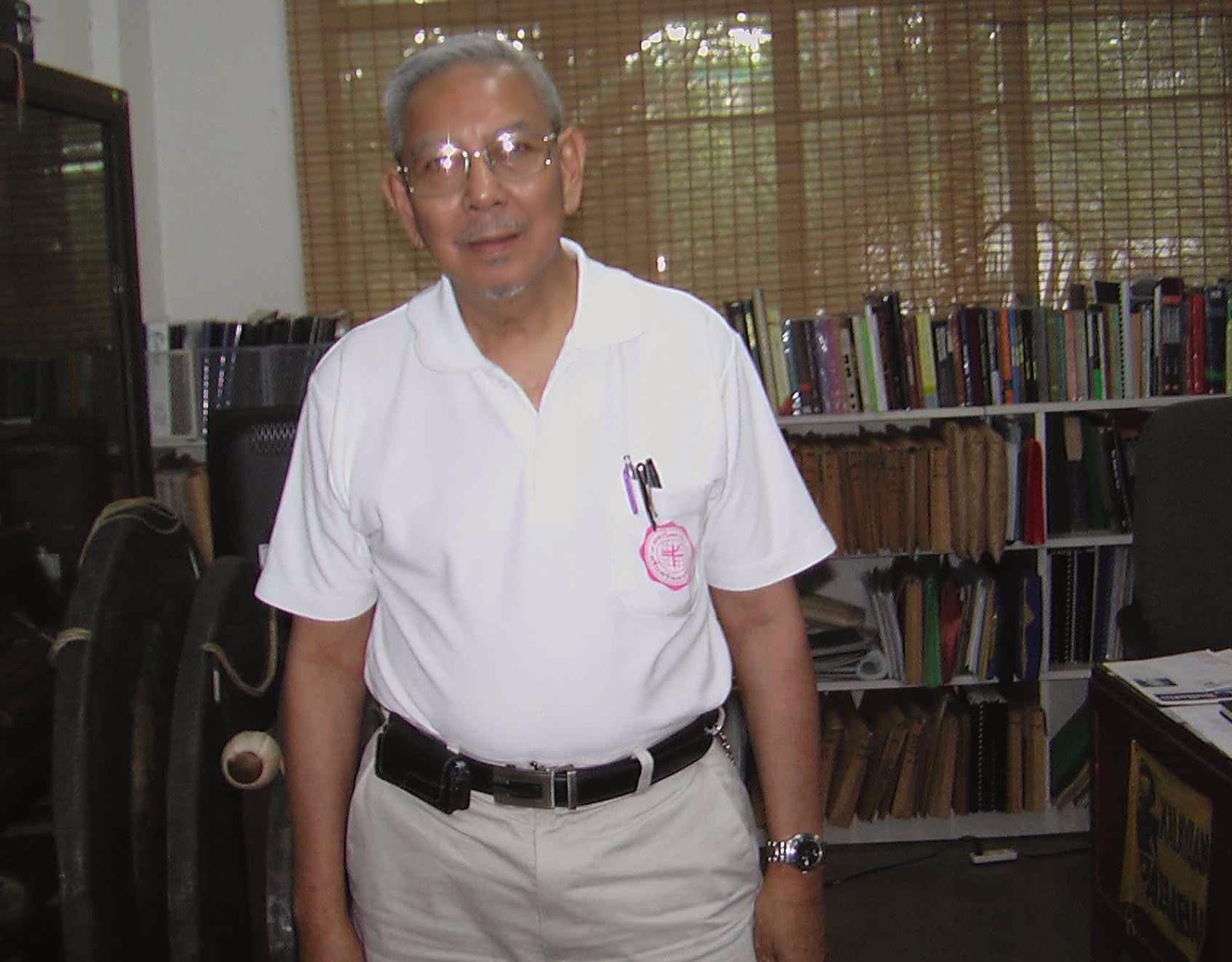 Dr. Ramon Santos has finally been knighted as National Artist in the Philippines. He has been the single most important champion of Filipino music and musical culture taking the baton from the legendary late Dr. Jose Maceda, who was also knighted with this same award for being the fount of this pioneering spirit that made the College of Music at the University of the Philippines a bubble bed for musicology, in particular, and other disciplines strong and relevant to the country. This vanguardism, guardianship and conscience that Dr. Santos represents has now spread throughout Asia through his students as well as the students of Dr. Maceda - of which Dr. Santos is a major one. (I will write a separate blogpost on Dr. Maceda later)

I decided to do my graduate studies in music at the College of Music, forgoing USA and Europe, because I read of the great work of Dr.Maceda. When I arrived in 1978, Dr. Santos was the new (and very young) dean of the College. Within the first semester I knew I made the right decision to study there because Dr. Santos was a great teacher. He had this grasp of the musical history and musical content of the Philippines juxtaposed against its international hinterland. Filipino musical creativity and its history was comparable to developments in other major musical histories.

I was so motivated that I wrote an article in the Singapore Business Times (where I was a music reviewer at that time). Click on the image to enlarge to read as a separate file 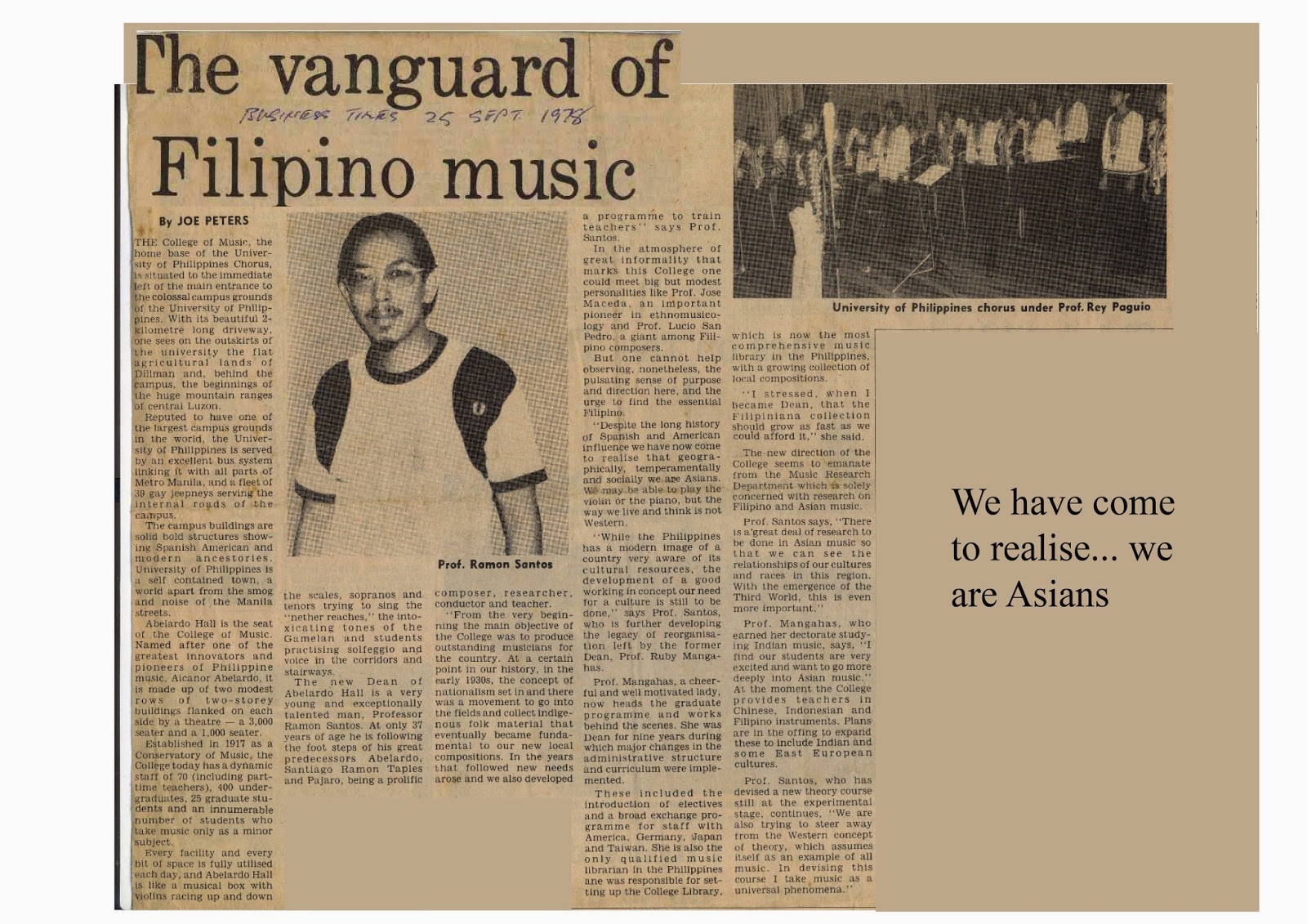 As Dean he was in the right place at the right time - and he did the right thing. He holds the record till today of being the longest serving dean. The foundation for major reform began - based on his predecessor's (Dr. Ruby Managhas) nine year service as Dean, who brought the College to a world class level. Under Dr. Santos the College developed structures and designs for an East West balance. He saw a clear route to serving the entire Asian realm based on Dr. Maced's brilliant field methods and fundamental musicology and composition-based initiatives, Dr. Santos concentrated on developing graduate students that spanned the Philippines and Asia. He grew in stature and became a brilliant voice on the international stage in musicology, music education, new modes of performance and composition.

I did an audio interview with Dr. Santos some years ago in anticipation of a great event like this - he becoming a National Artist of the Philippines. I have made excerpts into short movies with some photographs and videos that I captured at various events. The images are just there for the video. It is the audio that I am highlighting. His deanship ended in 1989 but there was a twist. What followed for the next decade or so was a process to dismantle what Dr. Santos had set into motion. This is not new in the music world, but he had the mettle and gumption to carry on despite this draw-back. In this clip (below) Dr. Santos is actually quite forgiving of what was a major delay in the development of the College

The College of Music Today

Today, Dr. Santos has come a full circle and he is back at the College of Music as Director of the Ethnomusicology Centre and President of the Philippines Musicology Association. He is once again the vanguard to a new generation of academics who are now steering the College of Music back to it's destined role in the Philippines and Asia. The best accomplishment has been the establishment of the Ph.D Programme - something that should have happened at least 15 years ago. The trajectory for growth and expansion is currently taking place in musicology, music education, composition and performance. A new set of leaders have been groomed and are building up world class programmes in music education, composition, musicology and performance.

He has been in countless ASEAN music projects and provided leadership and guidance through initiating many projects that gave impetus to research, documentation and publications on ASEAN musics. I have had the honour of serving with him on many of these projects. The ASEAN Composers Forum on Traditional Music and the ASEAN Study Series are of particular importance in re-igniting ethnomusicology development in Southeast Asia.

Dr. Santos was one few Asians who served on the International Music Council. He championed the musical diversity programme of IMC. In this audio clip he speaks about that and also why Asia does not play an important role in this Council. He believes that IMC is important and he hopes that Asia will use its international networking potentials to help with the sustainability problems of Asian musical systems and musical cultures in the present era.

The rondalla is a national treasure of the Philippines. Dr. Santos took the initiative to bring this to the world with the International Rondalla Festival. This festival was launched as part of the "Many Musics" programme of the International Music Council. Four such Festivals have been staged in the Philippines so far, bringing tremolo and plucked music genres from around the world in a week long exchange of conferences, exhibitions, workshops and concerts. The forward planning now includes staging this festival in other countries

In Southeast Asia, outside the Philippines, only Singapore has two rondallas at the National University of Singapore and the St. Anthony's Church in Woodlands. Last year, the first rondalla in Thailand was set up at Mahasarakham University. Here is a video clip of Dr. Santos talking about that rondalla during the (APSE) Asia Pacific Society for Ethnomusicology conference at Mahasarakham.

Dr. Santos has set up a Forum for Dialogue among Music Research Centres called Laon Laon. It has been a wonderful opportunity for us, the graduate students from the College of Music who are spread all over Asia, to meet and share research interests and projects.  Laon Laon is now the legacy of the College and encapsulates the core concepts of the Maceda-Santos vision for sustainability and balance in national music cultures for modern times - with Asia foremost in its deliberations.

I Congratulate Dr. Ramon Santos on receiving the National Artist of the Philippines award and I wish him the best of health to keep doing what he has set in motion so that his vision for Asia can be fully achieved